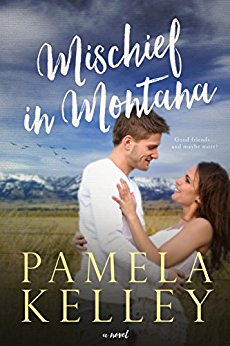 Book 26 in my Goodreads Reading Challenge is Mischief in Montana by Pamela Kelley.

‘Travis Jones has been in love with Isabella Graham for what seems like forever, but he’s never done anything about it, especially since his best friend Christian was dating her. But now that Christian is married to someone else, Travis is finally ready to make his move.

But Isabella has no idea how Travis feels. She thinks of him as her bossy friend and an attorney that she does a lot of work with. She would like to date Aidan who just moved back to town after living in NYC for many years as a celebrated artist. Aidan seems somewhat interested but is hard to read, making him that much more of a challenge…and has Travis wondering if he even has a chance. But he isn’t going to give up trying.

Add in Missy, a new bubbly blonde realtor that Isabella has to train, and her conniving, fake Southern Belle cousin Bethany, who is newly divorced and has set her eyes on Travis, and Isabella has quite a lot to deal with!’ (Thanks Amazon!)

So I picked this book, not realising that I had already read the first book in the series, Six Months in Montana.  This was a nice surprise, as I had already been introduced to a number of the characters.  As you all know, I enjoy reading a series where I get to learn more about other characters.  If i’m honest Isabella wasn’t at all how I expected her to be – I felt that she had been portrayed very differently in the first novel.  Admittedly, as this is the third book in the series I may have missed some important information about her, but until I read the second book i’ll never know!

I felt that a bits of the storyline were nice and believable (like fancying the wrong man, when the right man is right in front of you – we’ve all done that), and we’ve met people like cousin Bethany who will attempt to get what they want at any cost.  Isabella isn’t weak or stupid though, so don’t think that before picking up this novel.  She’s a strong woman just looking to cement her place in the world.  So the characters tick the boxes.

Setting – I love small-town America romances, so also a positive.  Not much more to say on that one for me!

If you are looking for an easy read romance, where you know how it ends but that’s part of the charm then this is a good book for you.  Let me know what you think!