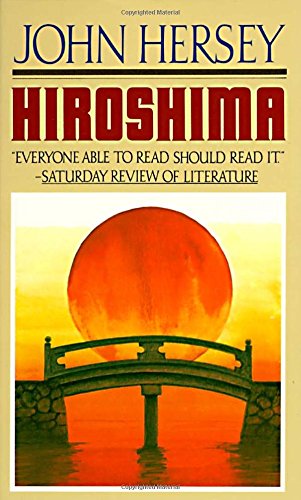 So i’ve made it to book 20 (only 30 left to go!) in my Goodreads Reading Challenge.  My latest review is of Hiroshima by John Hersey.

‘The room was filled with a blinding light. She was paralysed by fear, fixed still in her chair for a long moment. Everything fell.’

2015 is the 70th anniversary of Hiroshima, when, on 6 August at 8.15am, an atomic bomb was dropped over the Japanese city, killing one hundred thousand men, women and children in its white fury. John Hersey’s spare, devastating report on the attack was first published in the New Yorker in 1946. Written in the immediate aftermath of the disaster, it chronicles what happened through the eyes of six civilians who survived against the odds. It is a classic piece of journalism, and a defining moment of the nuclear age.’ (Thanks Amazon)

So for the first time this year, i’ve chosen a non-fiction book to read as part of my reading challenge, and what a hard hitting, amazing piece of writing I chose.  This should be vital reading for all, not just lovers of History (we all know I love a bit of WWII history, whether it be fact or fiction).  In fact I truly believe all budding scientists should be made to read this important piece of journalism.  Our advances in technology are mind boggling, particularly, if like me, you are not scientific in nature.  This essay really highlights what effect these technological advances can have.  The atomic bomb was hailed as one of the most important advances in science and warfare in the 20th century, however the aftermath for those innocent civilians in Hiroshima and Nagasaki is horrifying.  John Hersey sought to bring clarity to the Allied countries as they celebrated their victory in bringing WWII to an end.  In an age where the news was only really accessible in newspapers, John Hersey wrote one of the most important articles of that time.  The New Yorker dedicated its entire issue on 31st August 1946 to his article, which follows six survivors in the aftermath of the atomic bomb in Hiroshima.

‘in general, survivors that day assisted only their relatives or immediate neighbours, for they could not comprehend or tolerate a wider circle of misery.’ (Hiroshima)

Thankfully the world has not had to witness the use of atomic warfare since that fateful day in 1945.  However, given that 70 years has passed and technology has moved on considerably, this article could not be more important right now.  As tensions rise across the world, I think it is vital that people have an awareness of the consequences of any action they may take.  The world lives in fear of a war breaking out that includes atomic warfare; this article shows that the world is right to be fearful.